The NERC-funded project “The Changing Arctic Ocean Seafloor” (ChAOS) has been going for a year now, and it is one of the most exciting interdisciplinary projects I have ever been a part of! ChAOS will quantify the effect of changing sea ice cover on organic matter quality, benthic biodiversity, biological transformations of carbon and nutrient pools, and resulting ecosystem function at the Arctic Ocean seafloor. We will achieve this by determining the amount, source, and bioavailability of organic matter and associated nutrients exported to the Arctic seafloor; its consumption, transformation, and cycling through the benthic food chain; and its eventual burial or recycling back into the water column.

We will study these coupled biological and biogeochemical processes by combining

We will focus our research on the Barents Sea, a part of the Arctic Ocean where drastic changes in sea ice cover and water mass distribution are the main environmental control. Common fieldwork campaigns will form the core of our research activity. Our focal region is a N-S transect along 30 degree East in the Barents Sea where ice expansion and retreat are well known and safely accessible. In support of our field campaign, and informed by the analysis of field samples and data obtained by our international partners (in Norway, Canada, USA, Italy, Poland and Germany), we will conduct a range of well-constrained laboratory experiments, exposing incubated natural sediment to environmental conditions that are most likely to vary in response to the changing sea ice cover, and analysing the response of biology and biogeochemistry to these induced changes in present versus future environments (e.g., ocean acidification, warming). We will use existing complementary data sets provided by international project partners to achieve a wider spatial and temporal coverage of different parts of the Arctic Ocean.

The unique combination of expertise (microbiologists, geochemists, ecologists, modellers) and facilities across eight leading UK research institutions will allow us to make new links between the quantity and quality of exported OM as a food source for benthic ecosystems, the response of the biodiversity and ecosystem functioning across the full spectrum of benthic organisms, and the effects on the partitioning of carbon and nutrients between recycled and buried pools. To link the benthic sub-system to the Arctic Ocean as a whole, we will establish close links with complementary projects studying biogeochemical processes in the water column, benthic environment (and their interactions) and across the land-ocean transition. This will provide the combined data sets and process understanding, as well as novel, numerically efficient upscaling tools, required to develop predictive models that allow for a quantitative inclusion seafloor into environmental predictions of the changing Arctic Ocean.

More information can be found at https://www.changing-arctic-ocean.ac.uk/

The Oceans, and human impact on them, were suddenly thrust to the centre stage of public consciousness.

Now it’s 2018, and this month the Grantham Institute for Climate Change and the Environment at Imperial College London, hosted His Serene Highness Prince Albert II of Monaco to deliver its 10th Annual Lecture.

Appropriately, the affectionately titled ‘Green Prince’ spoke about the Oceans. His focus? The threat of Climate Change, and a suggested new way forward: a sustainable ‘Blue Economy’.

After campaigning for over 25 years on environmental issues, including setting up his Foundation whose purpose is to protect the environment, Prince Albert II has certainly earned his nickname.

His Serene Highness also stands out as the only head of state to visit both poles. And, obviously a fan of cold climes, he competed in bobsleigh for Monaco in five successive Winter Olympics … so luckily wasn’t put off by the polar conditions that greeted him in London!

HSH Prince Albert began the lecture with a plea: now is the time for scientists, policy leaders, economic players and civil society to devote the time and effort needed to safeguard our oceans.

Why? Because the oceans are a key player in global climate, absorbing more than a quarter of anthropogenic (human-produced) CO2 and 93% of the excess heat caused by human activity.

“The health of our oceans is suffering from the effects of climate change. The warming of the waters greatly endangers ecosystems and damages their biodiversity. Ocean acidification affects certain species… and the melting of glaciers increases sea level and damages the health of polar ecosystems.”

Yet it was only in 2015 at COP21 in Paris, 23 years after the Rio Earth Summit and 18 years on from the Kyoto Protocol, that the Oceans even made it ‘onto the negotiating table’ as a relevant player in global climate.

Three years on from Paris and great strides have been made, culminating in a new UN Special Envoy for the Oceans (Mr Peter Thompson of Fiji).

Nevertheless, HSH Prince Albert argued that much more must be done; and efforts are being held back as some states fail to act.

HSH Prince Albert attributed scientists (that includes Geochemists!) a central role in the effort to convince sceptics. It’s time to step up our efforts to provide the data that will direct future policy and investment decisions.

Like Blue Planet II, His Serene Highness highlighted plastic pollution as one area of growing public awareness, urging action, including an expansion of wastewater treatment. According to the UN, 52% of the world’s wastewater is currently left untreated.

Despite the challenges, HSH Prince Albert also highlighted the ocean of opportunities that awaits a civilisation that loves and respects the sea.

Like a ‘green economy’ has sprung up around renewable energy and sustainable development, so ‘blue growth’ is ripe to be invented.

This blue economy may include initiatives such as solar- or hydrogen- powered shipping, harnessing ocean-based renewable energy sources like the wind and waves, and promoting tourism and managed fishing in newly created Marine Protected Areas.

“Thanks to progressive international agreements informed by scientific evidence, and humanity’s sense to do the right thing, there is a new hope in the notion of the blue economy, the sustainable use of ocean resources for economic growth, improved livelihoods and jobs.”

Or, as His Serene Highness ended, with Winston Churchill:

“What is the use of living if it be not to strive for noble causes and to make this muddled world a better place for those who will live in it after we are gone?”

The Geochemistry Group committee are: 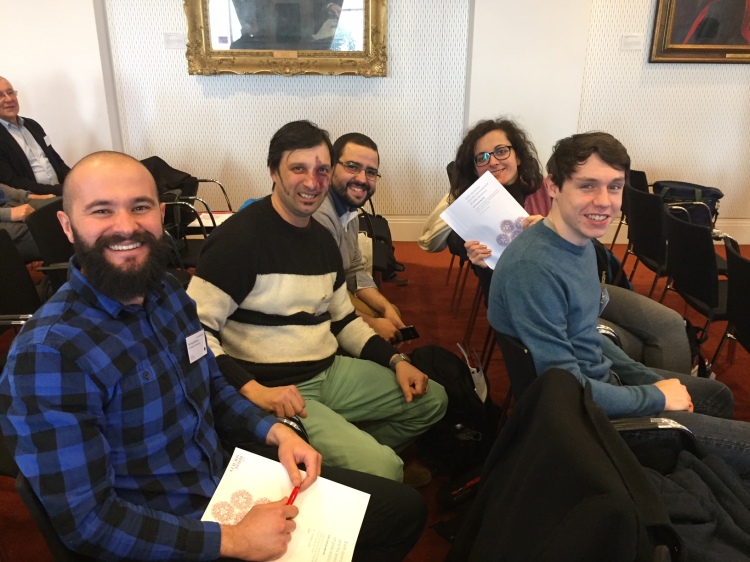 A recent meeting at the Royal Society in London called “Earth Dynamics and the Development of Plate Tectonics. Above are (some of) the Portsmouth Crustal Evolution Research Group enjoying the debate.

It was a really lively 2 day meeting with representatives from as far as USA and Australia, picked to give their perspective on different issues. So we went from other planets (Venus and Mars) to the building blocks of our own planet, with a great talk from Maud Boyet (a certain class of enstatites can resolve BSE trace elements and a range of stable isotopes – but not major elements!). Geodynamics was a major topic of discussion, with input from numerical modellers and experimentalists and, of course, debate from geologists on the veracity of the models. An excellent summary of the geochemical and isotopic evidence for the growth and reworking of the continental crust was given by some familiar names to this group – Tony Kemp, Peter Cawood and Bruno Dhuime. A lively debate followed a presentation by Jun Korenaga, reexamining the famous crustal evolution growth curve models and proposing something controversial. The claim was based on the model representing the mantle evolution (Nd isotopes in basalts) rather than the crusal record (Hf and O in zircons). However, it would be nice to know if the Nd record presented stands up to scrutiny. Some very engaging talks on links between geodynamics and the atmosphere and biosphere kept spirits up, with Cin-Ty Lee talking about continents and their control on climate, Aubrey Zerkle introducing us to the idea of “Biogeodynamics” and giving a great talk on her work on the nitrogen and phosphorous cycles, and finally Tim Lyons illuminating us on the Proterozoic, the rise of oxygen and the possible tectonic links to climate and life. Bob Stern finished up with a summary discussion and then we all went home for jelly and ice cream.

In January 2018, NUI Galway hosted the inaugural Irish Geosciences Early Career Symposium 2018 event, a two-day conference with discussion hubs, workshops and presentations for PhD students and postdocs. Organized by PhD students and postdocs from NUI Galway, Trinity College Dublin, University College Dublin, Dublin Institute of Advanced Studies, and University College Cork, the symposium aimed to connect early career geoscientist with senior scientists, industry members and policy makers to provide opportunities for collaboration, debate, and knowledge exchange. Attended by around 100 delegates, scientific discussion hubs spanned a wide range of topics, including Public Perception, Tectonics, Modelling, Geochemistry, Fluid Flow, and Big Data Management. After an address by the Minister for Community Development, Natural Resources and Digital Development, Sean Kyne TD, keynotes about the future of geoscience were delivered by Dr. Patrick Redmond (Teck), Dr. Joel Gill (British Geological Survey) and Dr. Margaret Desmond (MaREI), followed by a panel discussion. The day was rounded out by 20 lightning talks, a poster session, and a conference dinner.  The second day comprised workshops on Science Communication, Writing of Publications and Funding Applications, Career Development, Statistics, and introductions into specialist topics geared at non-specialists. The meeting was wrapped up by the awards for outstanding posters and lightning talks.  A field trip to County Clare to study Karst landscapes and deltaic deposits was offered on the days following the meeting.

The successful symposium will surely be repeated, and possibly interesting for early career scientists from across the Irish Sea as well!

by Rachael Shuttleworth
Geochemists and palaeoceanographers use the chemical and isotopic composition of preserved foraminifera (carbonate microfossils) in deep sea sediments to reconstruct the environment of the past. There are a vast range of things we can reconstruct based on the chemistry of these fossils from temperature to nutrient utilisation. The research I do focuses on the boron isotopic composition of foraminifera, and how this can be used to calculate the pH that the carbonate shell precipitated in.

Palaeoclimate and palaeoceanography is a very necessary branch of geochemistry in today’s world as we head towards a higher CO2 world. By looking back in Earth’s history to a time when CO2 was equal to that or higher than observed today we can make better predictions as to how environments will change in our future. However, to do this effectively we need to better understand how different the chemical composition the forams (foraminifera) record is to the ambient environment, it is this question that led to my venture into modern biology and hitting the fieldwork jackpot of 3 months in Bermuda…

The idea here is that respiration, calcification (& photosynthesis if the foram hosts symbionts) work to alter that chemistry of the environment immediately surrounding the foram where based on the viscosity of water diffusion dominates over turbulence. In order to investigate this we aim to initially define what this offset is by measuring the isotopic composition of the water and forams of a range of species and size fractions. We then want to look at how much each process (eg. Respirartion) contributes to altering the isotopic composition of the microenvironment. This work was a massive learning curve for me, swapping a clean lab for boat trips, and Teflon cleaning for shackling up plankton nets!

This work is still ongoing and is part of the SWEET (http://www.thefosterlab.org/sweet/) project and will (hopefully) form part of my thesis.

Welcome to the new webpages for the Geochemistry Group.

These pages will serve as a continually updated resource for the UK’s geochemistry research community.

In addition to this rolling blog page, you will be able to find links to our parent groups, the Mineralogical Society of Great Britain and Ireland, and the Geological Society of London, as well as downloadable files of application forms for our student travel bursary scheme, Early Career Prominent Lecture Series, and the Geochemistry Group Postdoctoral Medal.